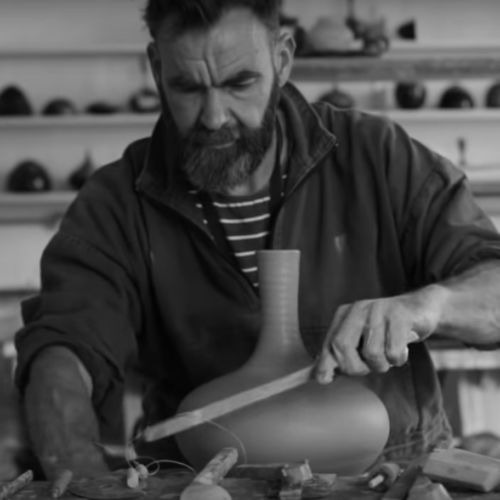 Duncan’s fascination with clay began as a child in his parents’ garden. The colour, smell and malleability of the earth led him to discover at school the transformation of clay by heat into a permanent object. As a teenager, Duncan was captivated by seeing his teacher throwing a pot on a kick-wheel, his bedroom posters were images of communist revolutionary heroes and 20th-century studio pottery.

Since gaining an MA at Cardiff School of Art & Design, where he was taught by Michael Casson, Duncan has worked consistently as both a practicing ceramic artist and an educator in Higher Education. He is based in Cardiff.

Duncan creates statement vessels with surface carbonisation which provides colour and tonal richness. After firing, the vessels are wax-polished and often the openings are inlaid with gold leaf. With his work, Duncan aspires to embody simplicity of form, balance, and an integral relationship between form and surface, interior and exterior. He considers himself as having a modernist creative sensibility in the development of his practice.

“Essentially I see my pots as containers of distilled thoughts, moments arrested in time expressing the narratives of their own making – objects of contemplation.”

Duncan has exhibited extensively both nationally and internationally in both solo and group exhibitions as well as contributing to numerous publications.